Strolling down Rue des Martyrs, a stretch of Paris’ South Pigalle that packs more gourmet power in a single street than most entire neighborhoods do, I noticed a patisserie that was clearly out of the ordinary. The names of several well-known pastry chefs– Pierre Marcoloni, Jacques Genin, Catherine Kluger, Pierre Hermé– were scrawled in an elegant font on the side of the entrance, and a sign in the window promised a selection of the city’s best pastries. Did I take the bait? Bien sûr!

Opened by Julie Mathieu and Muriel Tallandier, editors of the French magazine Fou de Pâtisserie, the boutique of the same name partners with prominent French pastry chefs to bring their creations under a single roof.

Read related: This Bakery Sells Some of the Best Butter Croissants in Paris

Fou de Pâtisserie claims to be the first boutique of its kind in France, and the concept is indeed intriguing, especially if you’re an indecisive taster.

Why worry about running around Paris trying to pay a visit to five or six of the best patissiers, when you can beeline here and get a box filled with delicious creations from several chefs?

Choosing is the Hardest Part…

Of course, on my first visit I didn’t come in with the intention of procuring a whole box; I’d have to settle on one. Was it a hard choice? You bet.

Finally, I settled on the “tart of the month” from a pastry chef I was unfamiliar with: Nicolas Bacheyre of the restaurant Un Dimanche à Paris.

He was named “Meilleur Espoir Pâtissier” (Best New Pâtissier) of Paris in 2016, and this was a chance to taste some of his work.

Related: The Best Street Food in Paris, From Crepes to Falafel

The “tart” was a rectangular creation with a sablé butter, cocoa and fleur de sel biscuit base, topped with gianduja and hazelnut ganache and then a second, airier layer of milk chocolate and tonka bean ganache.

But it’s not over yet. As finishing touches, Bacheyre added a crunchy, thin tablet and tuile of dark chocolate, the latter decorated with the restaurant’s name and logo.

Although the cake-slash tart was almost too beautifully presented to eat, I nevertheless relished in it, enjoying the contrasting textures and flavors of each distinctive layer.

The overall effect wasn’t too sweet, and the rich combination of chocolate, hazelnut, butter and fleur de sel salt was addictive. Yet you’d have trouble eating two of these. As with all truly excellent desserts, a small portion of this one was satisfying.

See Nearby: The Grand Pigalle Hotel & Its Ultra-Cool Cocktail Bar

It was served cold, which I thought was the right choice, as it preserved the crunchiness of the biscuit base and presented the layers from oozing messily together. Others may have preferred it served at room temperature, though.

The nice thing about Fou de Pâtisserie is that they have a small counter at the window where you can devour your pastry/pastries of choice in-house, if you wish.

The shop also sells a variety of gourmet treats and paraphernalia, from cookbooks to packaged macarons, cakes and spreads, utensils and aprons.

The staff is helpful and warm, willing to answer any questions or make recommendations.

In short, get thee to a pastry tasting. This is affordable luxury at its best. 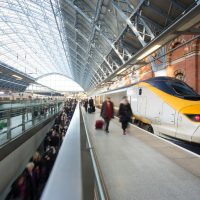 Iconic Bridges in Paris: Famous Appearances & a Bit of History 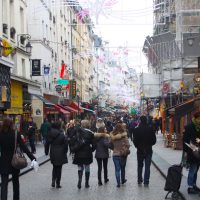 The New Rules on Where to Wear a Mask in Paris: A Guide & Map

Will Swimming in the Seine River be Possible by 2024? Paris Is Aiming for It.