Technically, the tangled arrangement of wide, grandiose streets known as the Grands Boulevards in Paris stretch all the way from the Eglise Madeleine church in the 8th arrondissement (district) to the Place de la Bastille in the 11th.

But with the opening of the Grands Boulevards metro station in 1998, the area has since been most associated with the bustling streets  between the Bonne Nouvelle and Richelieu Drouot stations.

Browsing the area’s elegant 18th and 19th-century arcades (covered passageways) and enormous, ornately decorated department stores is always a lovely way to spend an afternoon, whether you’re searching for a gift or simply window-shopping.

However you choose to explore it, there’s something intoxicating about roaming the bustling streets of a district deeply tied to the dawn of modernity in Paris.

You can almost imagine what it must have been like for Parisians living from between the 1860s and the first World War in 1914, experiencing a quickening pace of life that was until-then unprecedented.

Curious to explore it yourself, whether virtually or in person on a forthcoming trip? Read on to learn how to experience the neighborhood like a true flaneur or flaneuse.

The Grands Boulevards area is situated on the right bank of the Seine, just northeast of the Louvre and more or less due north from the Centre Georges Pompidou.

Quiz: Are You More Right-Bank or Left-Bank Paris?

A Bit of Neighborhood History

Ever wondered where the term “Haussmannian architecture” comes from? Paris’ layout was largely unchanged from its medieval guise until 1852, when the transformation of the capital was ordered by the Emperor Napoleon III.

To carry out the immense project, he appointed the city planner and architect Baron Georges-Eugène Haussmann, making him “prefect of the Seine”.

Haussmann radically restructured the Boulevards, giving them their characteristic form: long and straight with wide sidewalks. The Boulevards’ new structure made them a center for theater and café culture in Belle-Epoque Paris.

Of course, not all the area’s charming corners are Haussmannian. Many of the mesmerizing covered passageways (see below) predate the Baron’s blowing up the narrow old medieval streets to create the much-wider Boulevards.

As such, they co-exist in an interesting sort of tension, and the arcades serve as stunning reminders of a pre-industrial Paris.

Since the area’s legacy has much to do with theatre and performances, it would be a shame not to take in at least one show while in the area– or at least get a glimpse of the historic facades of these legendary venues.

Established some 150 years ago, this music hall was a symbol of Parisian life, and today boasts an eclectic program of music and dance. Legends including dancer and resistance fighter Josephine Baker have performed here in the past, and the theatre has appeared in works of art including Manet’s Bar aux Folies-Bergère, pictured above.

Related: These 5 Places in Paris Aren’t Usually Associated With African-American History. They Should Be.

A masterpiece of the Haussmannian project and built by architect Charles Garnier, the Opéra no longer shows performances of the same name, instead housing the National Ballet and staging dance performances.

The exterior alone is magnificent; take a stroll down the Avenue de lÓpéra to get at the heart of Haussmann’s vision for a bold, modern Paris replete with enormous spaces. Inside, the grandiose central stairway is an essential sight, as is Marc Chagall’s magistral ceiling fresco in the central auditorium.

(Book tickets for a self-guided visit of the Opéra Garnier (via Tiqets.com)

With a string of superlatives under its belt (the biggest auditorium in Europe, the oldest movie theater in Paris), Le Grand Rex is well aware of its legendary status.

The Rex’s lush interior and large screens make for a memorable cinematic experience (although most movies are dubbed into French). This is also one of the city’s most-coveted concert venues.

Paris’ equivalent of Madame Tussaud’s is one of the oldest wax museums in Europe and boasts 300 works. The current collection features life-size wax renderings of figures from the Emperor Napoleon to French President Emmanuel Macron and German Chancellor Angela Merkel.

(Book tickets for the Musée Grevin Wax Museum via Tiqets.com)

Contemporary and historic celebrities like Bono, Charlie Chaplin, Lady Gaga and Jackie Chan also populate the odd museum. This is a good option when you’re visiting the area with kids.

This legendary music hall and theatre has hosted countless legends, including Edith Piaf, who gave iconic performances here. The facade alone is worth taking in, and photos of famous performers are displayed around the box office.

Related: Seeking Edith Piaf in Paris? Beeline to These 4 Places

Eating Out and Shopping in the Grands Boulevards

There are myriad choices for eating out, tasting and shopping in the area, which is unsurprising since it’s associated with the rise of the Parisian bourgeoisie and consumer culture.

Roam through the old covered galleries (arcades), explore the grandiose, lavishly appointed department stores on Boulevard Haussmann, or stop in for a bite in one of the area’s historic Belle-Epoque restaurants. 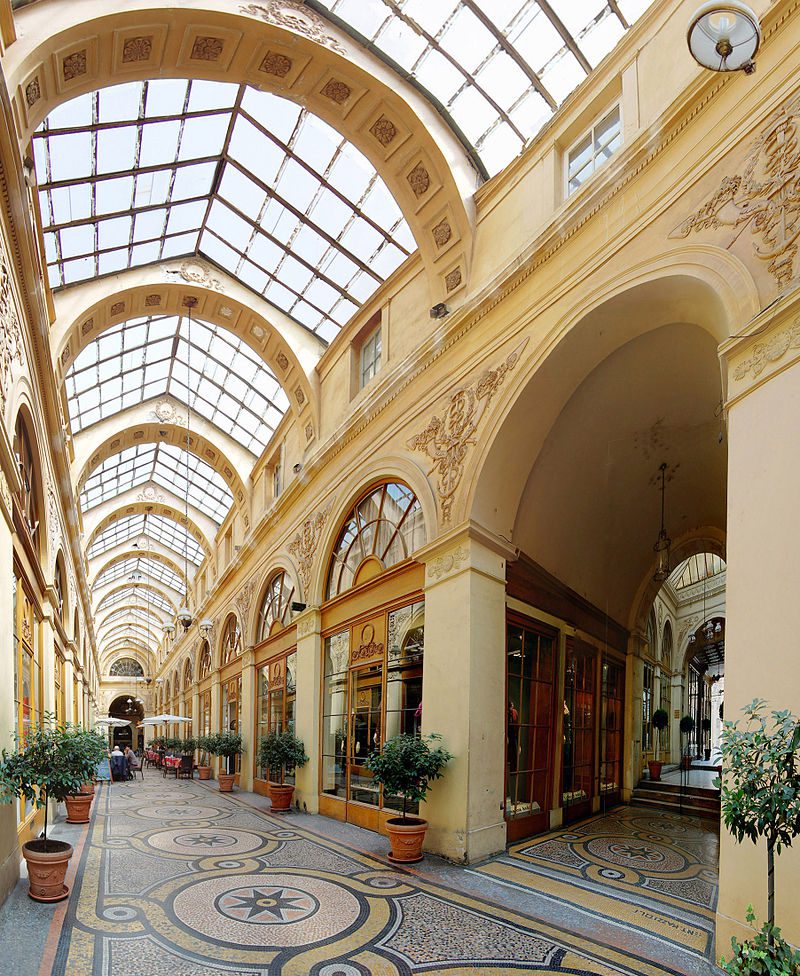 Bored with shopping in global chains– or simply need to get out of the rain? Whatever the case, be sure to browe the ornate, historic nineteenth-century arcades that you can easily duck into from several points along and near the main boulevards.

With glass roofs and tiled floors, quirky shops and restaurants, they offer the closest thing, perhaps, to a time warp. It’s no wonder so many people have found them mesmerizing and worthy topics for art and literature, including the critic Walter Benjamin who wrote a lengthy, unfinished set of essays about their history and odd power as early consumerist spaces in the modern era.

On your right if exiting from the Grands Boulevards metro stop and heading east on Boulevard Poissonière, this attractive passageway is home to old-style tea rooms, antique bookstores and the exit to the Musée Grevin. It’s an ideal place for gift shopping, especially if you’re seeking Belle-Epoque- Paris memorabilia.

Related: How to Avoid Tourist Traps & Scams in Paris?

Directly opposite the Passage Jouffroy is the Passage des Panoramas, whose decorative entrance leads to a series of alleyways, known for their selection of 19th-century stamp collector shops. First opened in 1799, this is the oldest of the covered passageways in Paris.

Take a left further down to rue Vivienne and discover the most stylish and well preserved of the arcades. Worth the detour, La Galerie Vivienne is a sight to behold, with its graceful mosaic floors, airy glass rooftops, upmarket shops and boutiques and enclosed restaurants.

The sheer beauty of the place make its art and crafts stores seem intimidating, but staff there are surprisingly friendly and helpful.

If you’re peckish, consider lunch at Le Grand Colbert, an old-school Parisian Brasserie that offers yet another portal of sorts to La Belle Epoque.

The Galerie Vivienne lies right at the edge of the Palais Royal and surrounding neighborhood, yet another area I thoroughly recommend for strolling, shopping and musing.

You have to admit: the “Grands Magasins” (Great stores) on Boulevard Haussmann were appropriately named. More than mere department stores, Galeries Lafayette and Printemps are exemplary of Belle-Epoque elegance and attention to fine details.

Each bearing their own enormous cupolas, fine glass and metalwork, throwback lamps and other decorative details that most people can’t help but be impressed by, these historic buildings are worth a visit irrespective of whether you plan to shop.

And if you do plan to, you’ll find everything from gourmet goods and fine wines (at Lafayette Gourmet, 35 Boulevard Haussmann; or Printemps du Gout on the top floor of the Men’s store at 64 Boulevard Haussmann) to home items, designer clothing, shoes, luggage, perfumes and accessories for everyone under the sun.

Galeries Lafayette even boasts an extensive crafts and fine arts department, so if you’re looking for the perfect length of ribbon or oils brush, you may just find it there. 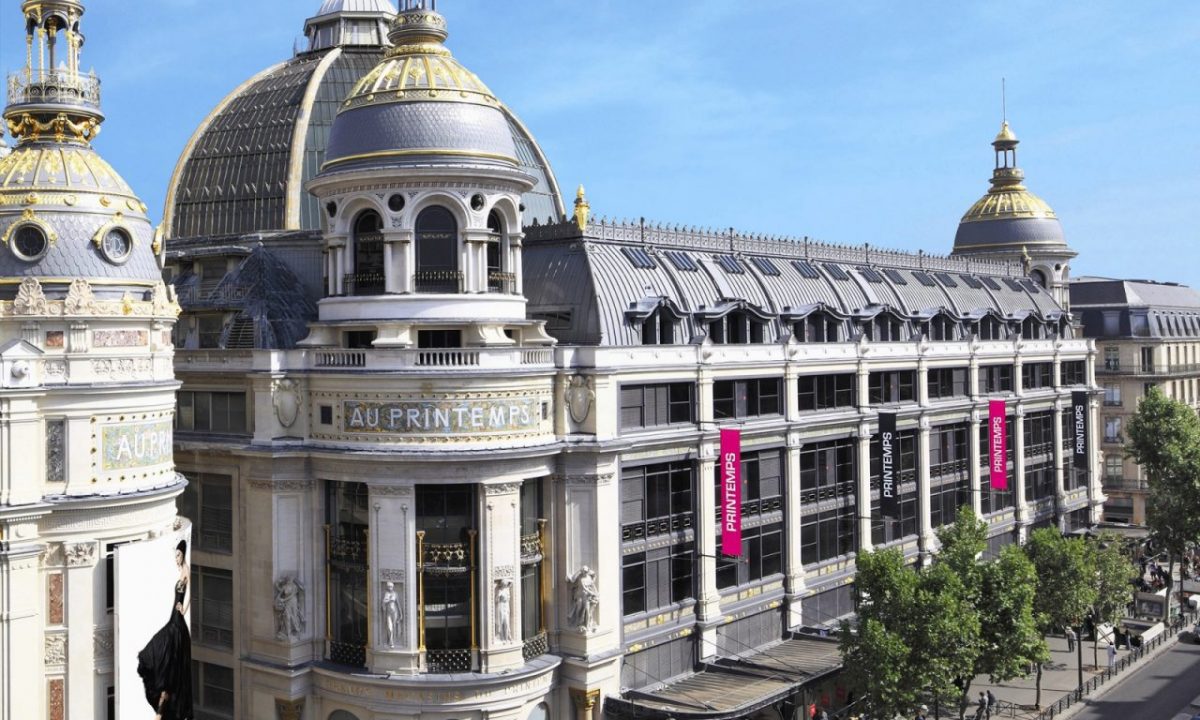 Consider stopping for tea or coffee on the rooftop at Printemps, and enjoying sweeping panoramic perspectives over the city.

And of course, during the winter holiday season, both department stores pull out all the stops with elaborate window displays and lights. This is another mesmerizing attraction for younger visitors, needless to say.

If you’re on a limited budget and need to stretch your Euros a bit further, check out this Parisian institution for simple, inexpensive fare in a beautiful and historically listed 19th-century dining room. You won’t get high-end cuisine at Chartier, but at just a few Euros for an entrée, who’s complaining?

The heady mix of tourists, locals and students makes the ambiance convivial. There are no reservations, so if you don’t want to wait in a long line, show up a few minutes before lunch or dinner service begins.

This lavish Parisian dining room situated on the right side of the Place de la Bourse (Metro Bourse) is exemplary of the Belle-Epoque brasserie, and first opened its doors in 1876.

An elegant zinc bar, low lighting and delicate stained glass windows make for a memorable decor, and the traditional French menu is solid, too.

Coffee aficionados will appreciate this Belle-Epoque-style, relatively tourist-free hang-out. Whether you’re seated indoors or on the terrace, the atmosphere is bustling and cabbage-heavy specialties from the Auvergne region of France are served up swiftly.

This chain of Irish pubs has built up a solid reputation due to its cozy atmosphere, hearty meals and party atmosphere. The heated terrace in Corcoran’s is also a big draw card.

If you’ve had your fill of rich French cuisine, Corcoran’s plain-but-tasty main courses are the perfect antidote, with staples such as homemade burgers, Irish stew and bangers and mash. Happy-hour cocktails are generous, and usually a bargain.

Le Foodist: French Cooking Classes in Paris That Aren't Intimidating
Why Paris' Quirky Parc de la Villette is Worth a Visit
Exploring Paris' Belleville District: A Haven for Artists, Immigrants & Revolutionaries
Paris Out of Hand: A Review of the Surrealist Guidebook to the Capital
France's Bastille Day Once Celebrated Constitutional Monarchy (& Other Curious Facts)
The Best Places for Picnics in Paris, From Parks to Riverbanks
Share177
Pin18
Tweet
195 Shares

8 American Women Who Moved to Paris– & Made History