Have you planned a visit to Paris in April? Congratulations! Hate crowds? Hmm, I may just have to take back my congrats. As you probably know, the month suffers a bit from its own ridiculous popularity– not to mention its idyllic portrayal in Hollywood films. So if you’re intent on enjoying it to the fullest, you’ll have to be tolerant of the pack.

I also recommend that you abandon any and all images you may be harboring in your head that involve, say, Meg Ryan strolling through fields of daffodils with the Eiffel Tower looming behind, accordion music swelling in the background.

Trash the inflated expectations, and open your eyes to the small, and beautiful, details around you. Then, and only then, will you be able to fully enjoy this time of the year in the capital.

Read related: Springtime Trips to Paris: Make Yours Magical, But Keep it Real

While April can be enchanting in the surreal, larger-than-life way you may be hoping for, I’d be remiss if I didn’t mention that it can also be expensive, noisy, and quite claustrophobic. High season resumes this month, so hotel stays, flights and train prices all go up.

You’l have to adjust your budget accordingly. Luckily, it’s also a time when being outside, even into the evening, is once again a pleasant prospect, and many outdoor activities are free or inexpensive. The sprawling spaces in certain less-trodden areas will also offer you some relief from the crowds, hopefully– read on for some suggestions.

To put it all rather simply, there are some very good reasons why so many visitors throng on the capital during the month lauded by poets and even by the one and only Josephine Baker.  But when a place (and time)  is too-loved and too-inflated, it can degrade or even cheapen the experience of it.

So don’t “just” be a tourist. Be a true urban and cultural explorer, determined to unearth some quiet or secretive beauty–  even if you spend lots of time in “iconic” places.

Again, look for small details in the familiar postcard scenes. I will pester you with this until it becomes your mantra. Defamiliarize the familiar: that’s how meaningful encounters with a place happen.

But enough pontificating! On to some practical and concrete suggestions for how to make the most of your trip.

THE LATEST: Should You Cancel Your April Trip to Paris in 2020?

Sadly, the answer is yes. The COVID-19 pandemic that erupted earlier this year has essentially made it all but impossible to travel to France at this time. See more on the current situation at this page.

The Matter of the Mercury: April Weather & Packing Tips

In April, daytime temperatures in Paris are generally on the cool to “warmish”– but not truly warm– side. Rain is expected about nine days out of the month, and sometimes it comes down in torrents. The late afternoons and evenings can be pretty cold. A favorite (rhyming) French expression of mine warns of the unexpected chill, too: “En avril, ne te découvre pas d’un fil” (In April, don’t take off a thread).

As I’ve no doubt noted elsewhere, I find it charming and hilarious that so many Parisians take that maxim so literally, remaining encased up to their chins in thick scarves during the spring. But they do have a point. Layering is always a good idea, as nights are generally chillier, and sometimes even daytime temps can creep back toward winterish ones.

In your suitcase, I’d recommend packing a few good sweaters, a spring coat that’s waterproof, a couple of moderately warm scarves and at least one pair of good, waterproof shoes for walking.

It can get pretty wet at this time of year, and you don’t want to be caught in a deluge unprepared– however romantic it may sound.

Best Things to See and Do in April?

My suggestions here are far from exhaustive, but here are a few inspiring ways to really see the capital during its most-celebrated month.

1. Get out and frolic in some green spaces

Ok, so the frolicking part is just a suggestion. This bit of advice is repeated in all of my spring calendars, but it’s unavoidable: who wouldn’t want to spend some time ambling through, or lounging around in, some of the nicer parks and gardens in the city?

As long as it isn’t pouring or irritatingly drizzly (the French like to call the latter a “shitty little rain”), I’d recommend spending some time getting to know the winding romantic lanes, quaint ponds, elegant statues, lush trees and flowerbeds at the city’s many lovely green havens.

Parc Monceau (pictured above; Metro: Monceau) is one of my favorites: with a long literary and artistic history, it features statues of writers including Guy de Maupassant (who referenced the park numerous times in his stories and novels), the composer Frederic Chopin, and the poet Alfred de Musset.

Other green spaces I love include the Promenade Plantée, a mile-long garden path built on a defunct railway above-ground and perfect for a long stroll around the Bastille district; the formerly royal Jardin des Tuileries, and the wildly popular but irresistible Place des Vosges in the Marais.

Related: Idyllic Spots for Picnics in Paris, From Parks to Riverside Quays

Originally built for King Louis XIII and a favorite spot for enjoying a casual picnic of falafel and gelato as soon as spring rolls around, this elegant square is simply idyllic once the flowers bloom and the temperatures creep up. See my related piece on some of the better places for street food in the capital to find out where to procure the goodies I mention above.

Finally, the Parc de la Villette in the far corners of northeastern Paris doesn’t get a lot of footfall from tourists– but its fascinating thematic gardens, science and industry museum and Philharmonic orchestra offer more than mere greenery. 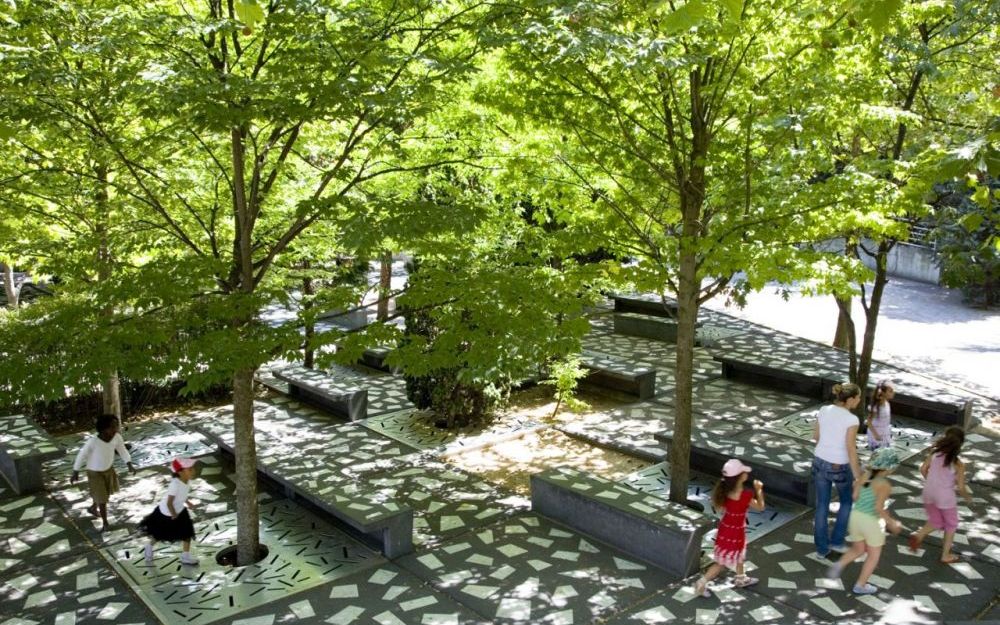 Read more on gorgeous green spaces in the city– and how to take advantage of them in the springtime–here.

You may also want to have a look at my full guide to some of the best places outside the Paris city limits for daylong excursions, from the lush gardens at Versailles and Giverny to medieval villages surrounded by sprawling fields or forests.

Another thing that calls my name once the temperatures creep well above zero is to wander through outdoor book, antique and flea markets. Paris has an abundance of centuries-old stalls and markets that are as much a part of the cultural fabric of the city as its monuments are.

While some are widely known– such as the famous “bouquinistes“ (independent booksellers) along the Seine with their deep green metal stands bursting with reading materials– others are a bit more off the beaten path, and frequented mostly by locals.

The weekend antique market at the Village St-Paul (pictured above; metro: St Paul) is one example of a quieter, but incredibly vibrant, spot to keep on your radar. Wander through its interconnected passageways on a Saturday or Sunday, and browse through antique coins, furniture, objets d’art and more.

Dating to as early as the 7th century, when the site harbored a nunnery, the Village St Paul was also once home to King Charles V, who had a residence built here in 1360. For the following two centuries, the royal French Parish had headquarters on the site.

Otherwise, while many visitors know about the world-famous Puces de Clignancourt flea market to the extreme north of the city, the quieter, but equally fascinating, Puces de Vanves in the far south is arguably more charming (and a tad less overwhelming).

Barter your heart out among the dozens of overflowing stalls at the Vanves flea market, or just amble through and revel in the interesting and sometimes downright-bizarre wares.

From old paintings, creepy antique dolls, records and books to commemorative silverware and porcelain depicting kings and queens of old, outdated gadgets and fine rugs, there’s a wealth of beauty and weirdness to behold.

A word of warning, however, the stall owners WILL often take issue with you photographing them or their items without permission. Sometimes, they refuse outright when you do ask, too.

3. Explore less-trodden corners of the city

Of course, it goes without saying (I hope) that you should extend your wanderings to explorations of as many neighborhoods and quiet nooks of the city as you can manage. See this guide for suggestions on places to get away from the crowds and see “Paris au printemps” through a fresh lens.

The city is fully emerging from the winter season  at this time of year, so galleries, museums and other major venues start to really get back into gear in April. Here are a couple of shows I recommend  this month:

Also make sure to peruse our complete guide to what’s new to see and do in Paris in 2020, with month-by-month suggestions for cultural openings, exhibits and more.

William Turner at the Musée Jacquemart-André 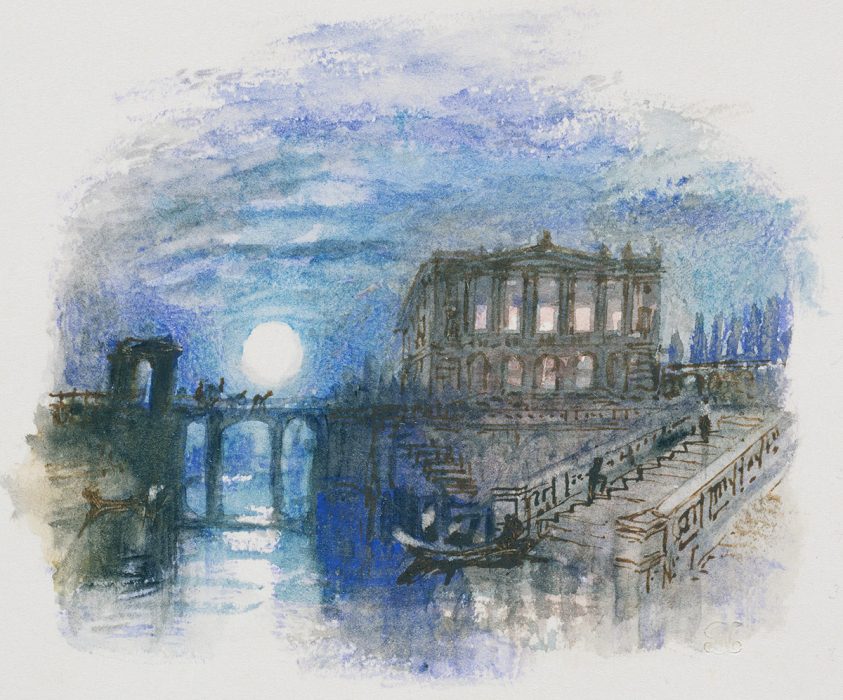 One show that both Parisians and visitors are sure to line up in large numbers to see? The major retrospective from famed English painter William Turner at the Musée Jacquemart-André, one of the finest small museums in the French capital.

Inaugurated on March 13th, 2020 and open through July 20th, the exhibit showcases around 60 distinctive watercolors from the master of light and shadow, who is widely considered to be on of Britain’s most important modern painters. 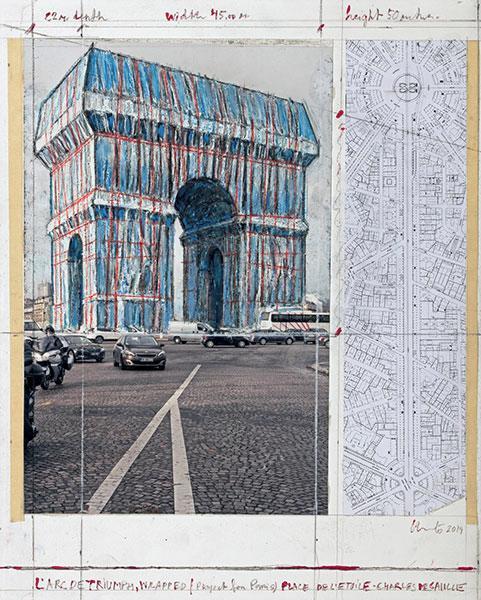 Celebrated for their whimsical, thought-provoking installations on monumental scales, Christo and Jean-Claude have taken over cities around the globe with impossible-to-overlook works of urban art. Of course, the whole adventure began in Paris. This major retrospective at the Centre Georges Pompidou  explores the artists’ early period, from  1958 to 1964.

The Re-Opening of the La Samaritaine, a Classic Parisian Department Store 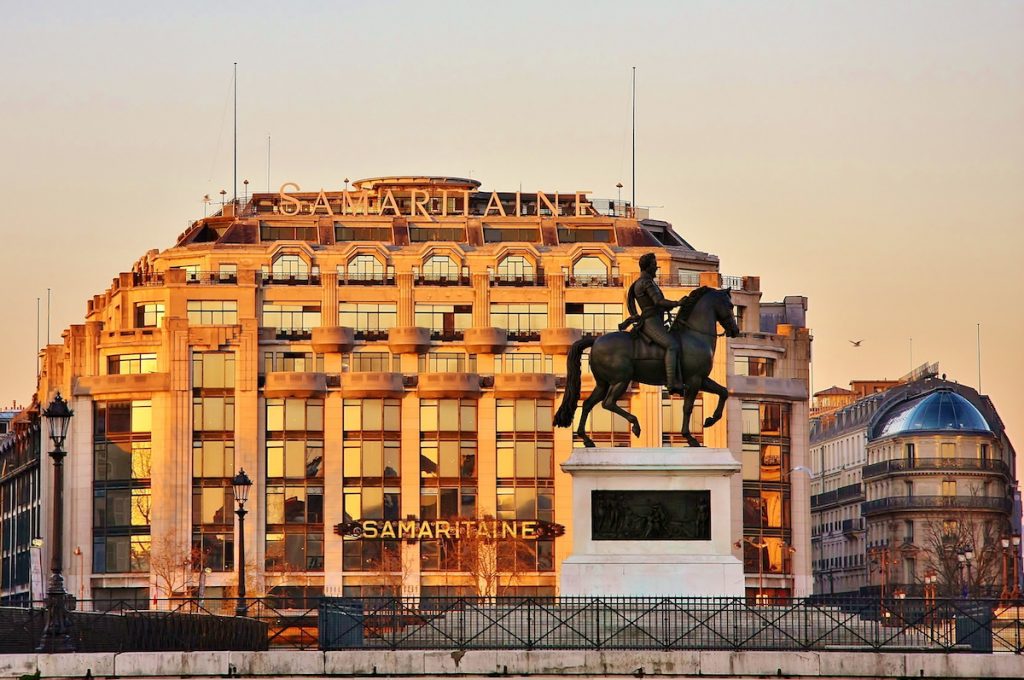 After closing for several years, the much-beloved Belle-Epoque department store is finally slated to re-open in April as a multiconcept space, combining retail spaces with a five-star hotel, restaurants and spa. While some aren’t thrilled with the idea of luxury-goods group LVMH reconceiving the historic store as a hub for high luxury, others eagerly await its rebirth. 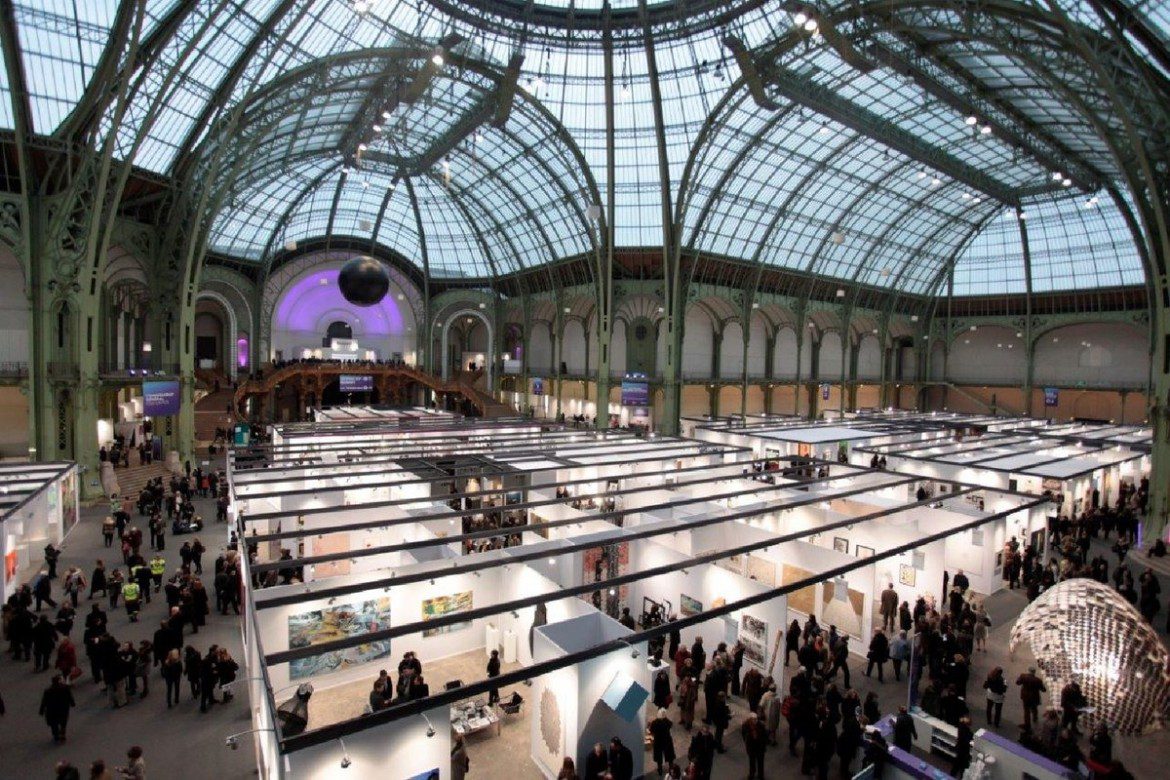 For anyone interested in contemporary art, April is a great month to be in town. The Art Paris Art Fair takes place at the Grand Palais every year, bringing together some 140 galleries from around the world to showcase their acquisitions under a single roof.

(EDITOR’S NOTE: Due to the ongoing coronavirus crisis in Paris and the rest of France, this year’s fair has been postponed until late May (the 28th-31st). See more information here.)

For a more complete list of exhibits, shows, and special events around town in April, see this page.

Book Your Trip: How to Prepare?

Especially when traveling in high season, planning ahead is essential. If you’re going by plane, search for deals on flights several months in advance (via Skyscanner). Taking the train? You can book tickets and discount passes at Rail Europe. Also remember to consider getting travel insurance for your trip to France: it helps to protect both your health and your finances while abroad.

You can see more on current safety guidelines for Paris, including updated information on how the coronavirus crisis is affecting travel to France, at this page.

Looking for a high-quality tour of Paris that matches your interests? Consider browsing the selection of tours offered by ParisCityVision. They have a wide number of tours that should fit well with any budget and set of interests, from visits to popular museums to day trips and bike or segway tours. 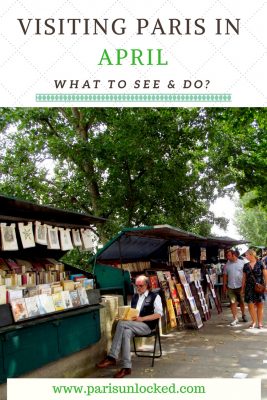 Some of the Most Beautiful Restaurants in Paris: 5 Stunning Settings

Why to Visit the Victor Hugo House in Paris: An Inside Look

Beautiful Bridges in Paris: Famous Appearances & A Bit of History

Where to Taste Delicious French Pastries in Paris: A Few Picks