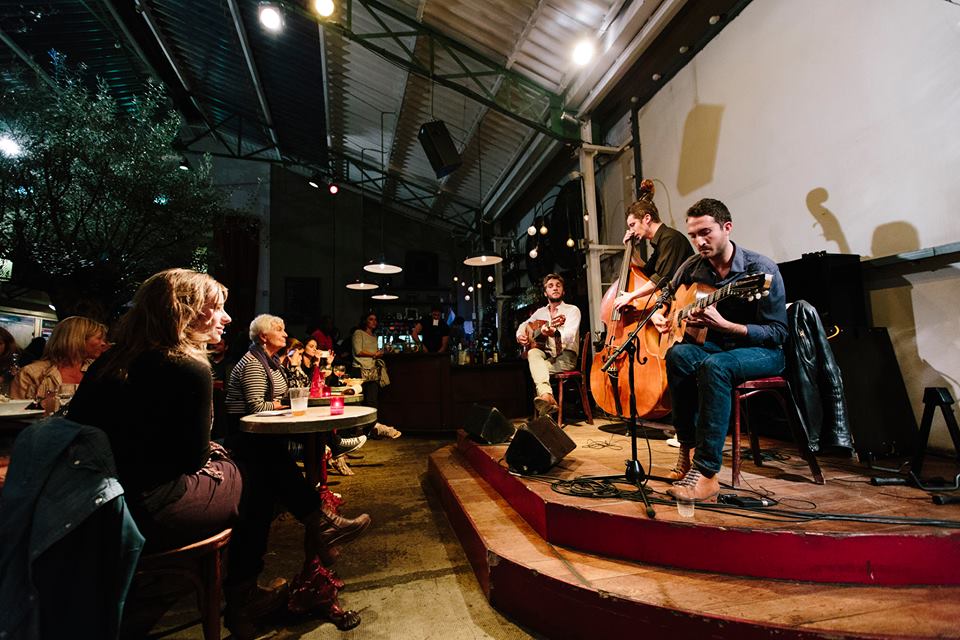 Ever since moving to the northeastern side of Paris, I’d been curious to give La Bellevilloise a try, having heard that it’s a closely-guarded favorite for a night out among locals of the young(ish) and hip ilk.

Housed in a building founded in 1877 following the bloody popular uprising known as the Paris Commune, this was initially the site of the first Parisian cooperative. It was built to provide free political, artistic and cultural instruction to the working-class residents in the area. 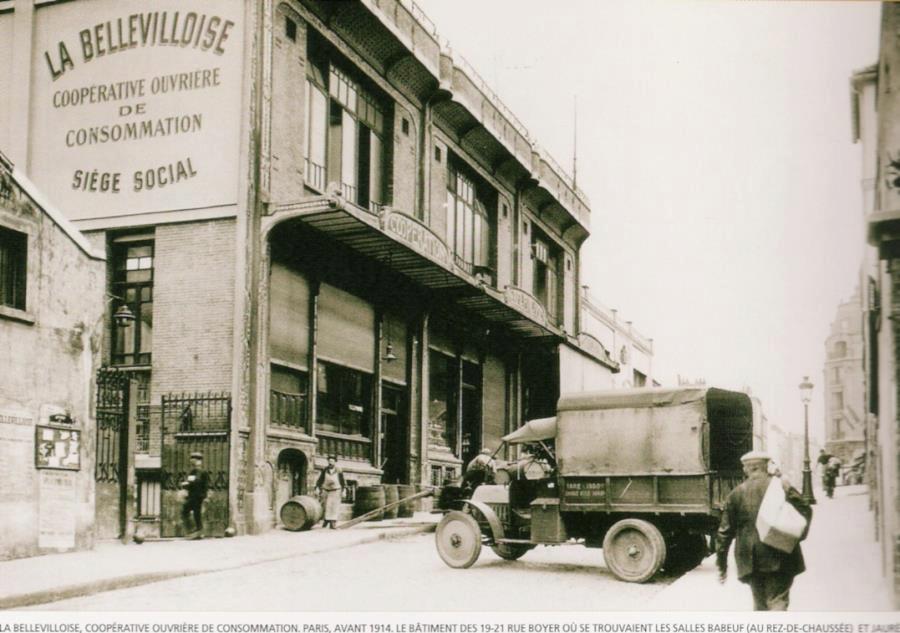 La Bellevilloise first opened during the 19th century as the first artistic and cultural cooperative in Paris.

Read related: Paris City Hall’s Square Was Once the Site of Brutal Executions

The launch and reincarnation of La Bellevilloise as a contemporary concept in 2005 mirrored those same values– true to the spirit of the neighborhood after which it’s named.

Re-opened as an independent space by three local entrepreneurs, it offers three levels of artistic, culinary and cultural activities. These are open to the general public either for free or a small entry charge during events like concerts.

Related: Our Complete Guide to the Arty, Diverse Belleville District in Paris

Today, the vast complex comprises a restaurant, popular dance club (one of Paris’ best, in my estimation), projection space for films and performances, and plenty of outdoor space, including a lovely terrace. 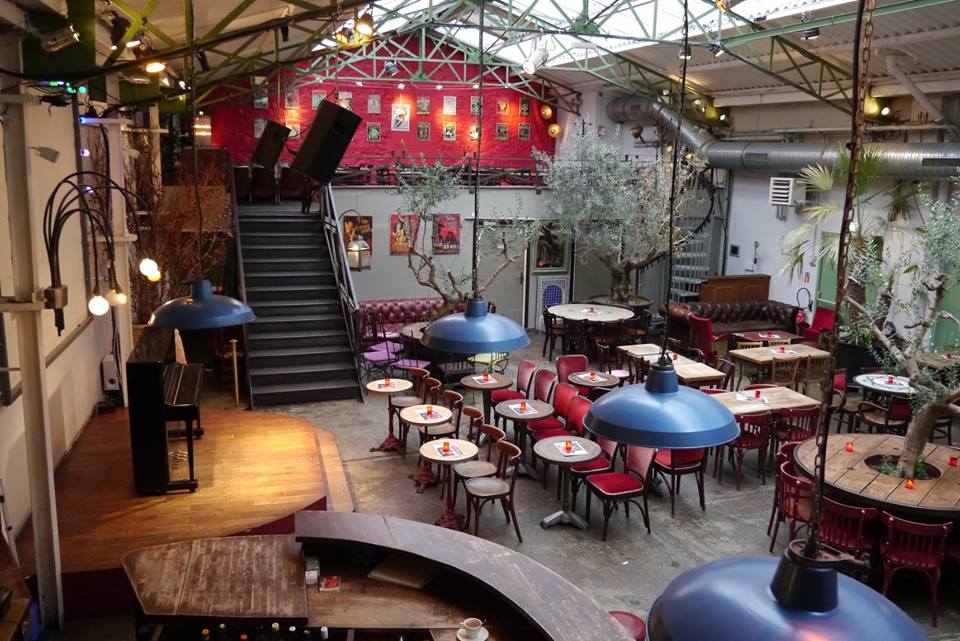 The Halle aux Oliviers is an airy, spacious restaurant complete with a high windows, leafy plants (including, olive trees, rightfully so), bar and a cozy mezzanine where you can nurse a drink, eat dinner and people-watch from on high.

Meanwhile, the adjoining Forum and Club provide plenty of space for live musical performances, poetry readings, temporary exhibits from local artists and other events. You can see all the amenities and spaces at La Bellevilloise here. 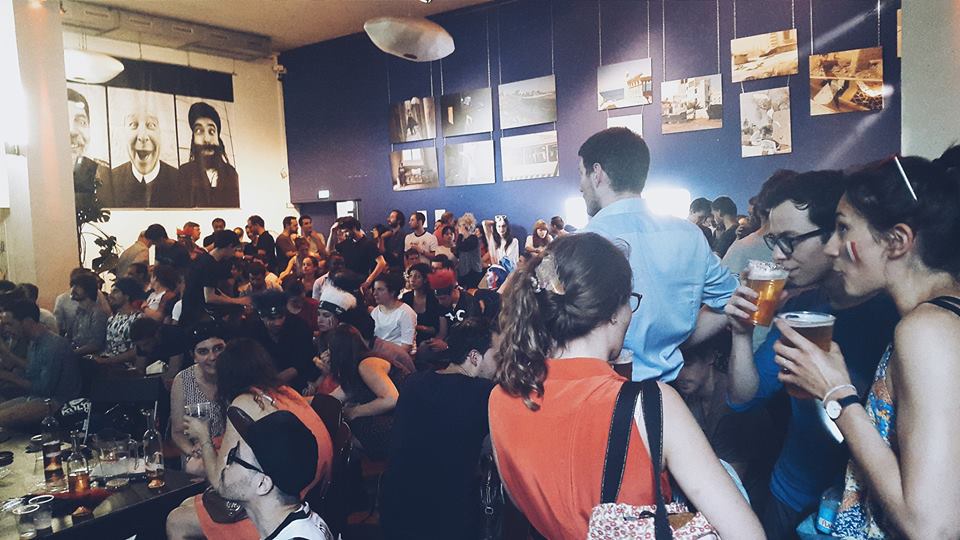 It took me a year and a half to get over to this lauded spot, so it was with great excitement that I finally ventured out for an evening there.

I may have felt like a kid walking into an artistic amusement park, but the first thing that struck me was how quiet it was inside.

There’s reason for this: the outside entrance is labeled as a “silent zone”, following anti-noise laws passed in Paris and a need for nightlife venues to carefully respect the neighbors.

Inside, the same laid-back ambiance reigned. With the exception of a few anglophones who were done up for a night out, the crowd mainly consisted of local 30-something Parisians donning casual dress, sipping drinks and catching up with friends on a warm summer evening.

The Evening Gets Started

Once I acclimated to my surroundings, it was time to start exploring the venue and its artistic fun maze. “La Halle Aux Oliviers” (Olive Tree Hall, literally) is a grand open restaurant occupying the first floor of the building.

You can freely enter the space with a drink from one of the other bars located on the premises, and sit down to either order an accompanying meal or just take in the live acoustic performances that begin each night at 8pm on a small stage. Up a flight of adjoining stairs, there’s a small lounge area for a more intimate setting.

Wanting to enjoy the warm air, I walked back outside and climbed up to the outdoor café terrace, filled with brightly colored chairs and tables, leafy plants and stringed lights. I grabbed a Monaco (beer mixed with lemon soda and grenadine syrup) from the bar and continued my ascent to “The Loft”. 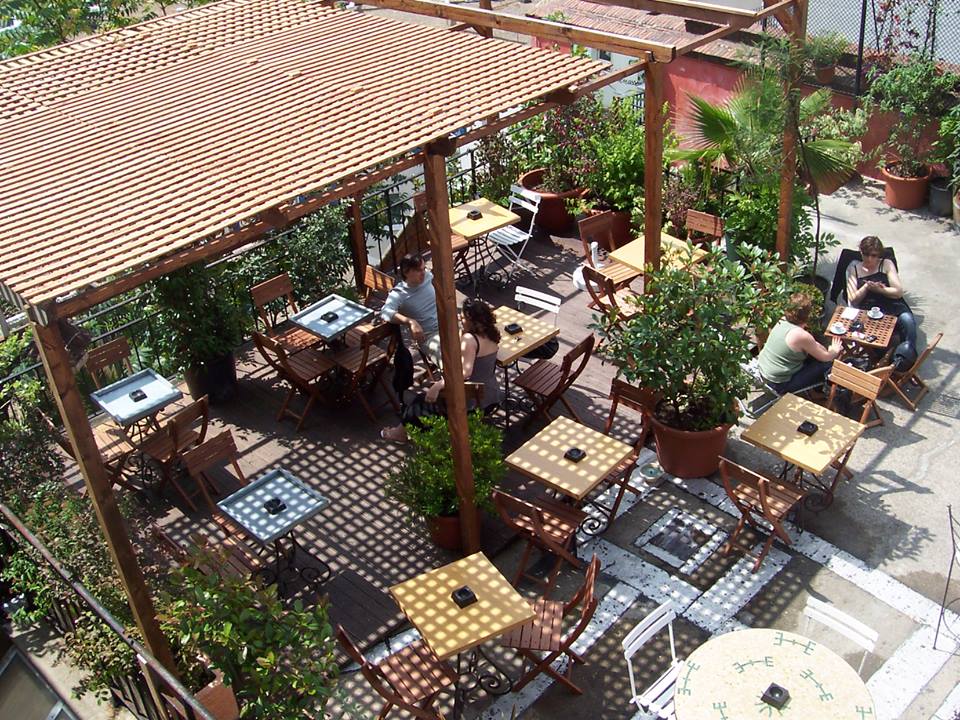 To my surprise, I found that the 500 square-meter space had been completely transformed into an art-deco meadow for a temporary exhibition.

With grass turf encompassing the entire floor, lounge chairs, hammocks, a small tented area with bean bags to lay on, and monkey-themed cocktails and smoothies at the bar, the space was just missing a tiki torch to embrace a fully kitchy aesthetic.

Wandering further inside, however, the visitor is further regaled by more charming little nooks: you can browse books from a lending library, enjoy computer outlets and wifi access, free acoustic concerts and screenings, day-time flea market shopping, and even a wellness area equipped with massage tables.

This all seemed like an ideal space to share ideas, relax, and even work, despite the over-the-top decor.

Creation, exchanging ideas, and community still seem like genuine core values here. Not to mention that drinks are relatively cheap, at least by Parisian standards.

Dancing the Night Away

After the clock struck 11pm, it was time to break away from our deep discussions and let loose within The Club. The indiscreet brown door that stays shut within the restaurant in the early evening opens into a hotspot for dancing, courtesy of local DJs playing an eclectic mix, until 2am.

Passing under the small circus-lettered sign and into the dark maroon-walled space, you might feel like you’re entering into the next phase of a dream where concentration gives way to free movement. As I lined up at the vintage ticket booth to purchase my bracelet, the theme of the night came into view on the bulletin board. “Do You ’80’s?” At this oh-so-East-Paris venue, anything seems possible– even in charmingly broken Franglais.

Getting There and Practical Information

The large brick building on Rue Boyer is easily recognizable, and located in Paris’ northeastern 20th arrondissement, between the arty, gritty Belleville district and the hip, if grungy, bar scene of Ménilmontant and Gambetta.

The venue is open on Wednesday and Thursday from 7:00 pm to 1:00 am and on Friday between 7pm to 2pm. Saturday and Sunday hours depend on the day and season, which can be found at the official website.

Eating and Drinking (Including a Sunday “Jazz Brunch”) 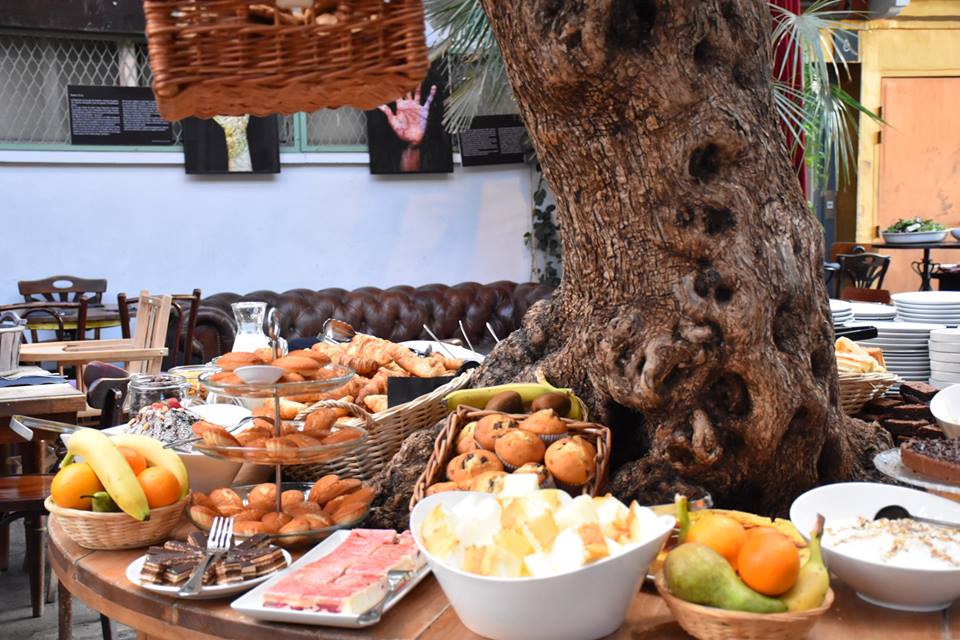 Lunch and dinner is served a la carte in the Halle des Oliviers; drinks and snacks can be purchased in the “Forum” at the bar. See the current menu here.

A “jazz brunch” complete with live music is served on Sundays at the Halle des Oliviers in two “sittings”, from 11:30 am and 2:00 pm.

La Bellevilloise is closed on Monday and Tuesday.

Check this page at the website for event schedules and cover charges.

Cover charges: Entry is free, except for concerts and other special events for which there are reasonable cover charges.

Editor’s Note: This article originally appeared on About.com Paris Travel. While information cited here was accurate at the time of publication and updating, prices and other details may change at any time. Please contact La Bellevilloise and/or visit their official site for up-to-date information on amenities and events.