Representing the glorious apex of springtime in the French capital, Paris in May is a wildly popular time to visit. Millions of people throng on the city during this month alone, hoping to take advantage of its “Goldilocks” weather conditions and full calendar of events (scroll down for some I especially recommend).

Trees and flowers are in full, lush bloom. Parks are full of cheerful locals and tourists enjoying elaborate picnics, sipping rosé wine and playing games of “petanque” or boules (a quaint pastime that involves striking steel balls against eachother on plots of sand).

Museum exhibition programs, open artists’ studios and various festivals are at full hilt. It’s generally a pleasant and exciting time to be in town.

Yet for some, May has its drawbacks. It falls in the middle of high season, meaning that you’ll have to contend with higher prices on hotel rooms, transportation and more.

And for anyone who’s crowd-shy, a visit in quieter months such as October or even March would be preferable. Whatever delights are offered by this winsome month, you’ll have to share them with hordes of other people. For some, this may negate much of the charm  altogether.

Still, I encourage most of you to give a May sojourn in Paris a try. It marks a nice transition point before the summer, when most Parisians get out of town and the entire city feels as if it’s been taken over by the tourist industry.

Whether you decide to go this year or next, here are my most useful tips for taking full advantage of all May has to offer.

THE LATEST: Should You Cancel Your May Trip to Paris in 2021?

Sadly, the short answer is “yes, you should almost certainly cancel”. The global pandemic that erupted earlier this year has shut borders and placed France (and possibly your home country) under lockdown, making travel virtually impossible at the moment.

While it’s unclear when these restrictions will lift, as of early April it’s looking unlikely that the crisis will be fully resolved by May 2021. See more on the current situation in Paris at this page.

If you’ve reserved a trip and have travel insurance you may qualify for refunds on some of your expenses. Some operators are also allowing travelers who can’t secure refunds to “cash in” on hotel stays, tours or other services at a later date.

It’s worth checking with tour companies, hotels, airlines and other operators to see whether their flexible cancellation or delay policies may apply to you.

The Matter of the Mercury: Weather in May & Packing Tips

In May, daytime temperatures in Paris are generally in the aforementioned “Goldilocks” zone: not too hot, and not too cold.

Mornings remain on the cool side, while in the afternoon, especially in sunny weather, you can expect the mercury to climb close to a pleasant 70 degrees F. In recent years, averages have often been even warmer.

On the downside, this is a rainy month: it’s not uncommon to see showers for about half of the days in May. Sometimes, these downpours can be sudden and very strong, disrupting outdoor idylls.

Despite the popular maxim that suggests otherwise, May is generally even rainier than April is in the capital. As a consequence, make sure you’re prepared by bringing along proper rain gear (see more in my notes on packing below).

How to pack that suitcase? Since the mornings can still be quite cool, I’d recommend that you line yours with a few long-sleeved shirts, trousers, a sweater and even a good spring jacket. Waterproof shoes and a jacket are also de rigeur: remember what I said about all that rain.

Finally, be sure to bring along shorts, skirts, t-shirts and other lighter clothes to wear on warmer days, which in recent years have sometime been positively balmy.

And don’t forgot the sunscreen: by May, the sun is starting to be stronger and more potentially damaging if you fail to slather on the stuff. Parasols have even come back into fashion a bit, in recent years…

Best Things to See and Do in May?

Here are just a few of my suggestions- think of it more as a smattering of inspiration rather than a set-in-stone program– for enjoying your trip to the fullest this month.

1. Have a decadent picnic– by the river, canals or in a park.

While some would argue that temperatures in the high 60s or early 70’s aren’t warm enough to warrant a celebratory picnic, I disagree. Even if you have to don long sleeves and keep your scarf on hand, little is more idyllic than laying out a carefully prepared, elaborate spread on the grass to celebrate the peak of spring.

Paris, of course, is famous for its lush and elegant parks, Seine riverside quays, and other spots ideal for dining al fresco. And while it’s “technically” not allowed to drink after 4:00 pm in public places, as long as you’re eating and not overdoing it (read: refrain from rowdy, obnoxious displays of public drunkenness), it’s absolutely fine to enjoy a glass or two of crisp white wine or champagne to make the affair a festive one.

I’ve never heard of an instance of anyone– whether locals or tourists– receiving fines as long as they remained discreet and didn’t go overboard. Of course, if you’d prefer to follow the rules to the letter, reserve the alcohol for lunchtime picnics. Whenever you stage yours, of course, make sure to entirely clean up any litter.

Beeline to some of the city’s better bakeries, markets and cheese shops to stock up on delicious, crusty bread, perfectly sweet, ripe summer berries (like the ones seen above, photographed at the Aligre market) pastries and other delicacies. Find a cheap blanket, if you can. Then, sprawl out wherever you can find a spot– and let the hours drift by.

See my full guide to staging an authentic picnic in Paris for suggestions on some of the better places to enjoy les pique-niques in the capital. This guide is also both thorough and helpful.

If you’re hankering for a picnic outside the city limits, my piece on the best day trips from Paris offers even more inspiration. Sites including the gardens at Versailles and the Fontainebleau forest make idyllic backdrops for a late spring picnic.

Since the weather’s now clement enough to spend several hours roaming outdoors, this is also a great time to embark on a self-guided walking tour that shows you some of the city’s architectural highlights and history.

Consider starting in the Marais (Metro: St Paul or Hotel de Ville), where sumptuous medieval residences such as the one shown above, the remnant of the fortified wall that once surrounded Paris and the Louvre, and stately hotels particuliers from the Renaissance stand alongside quirky newer buildings (the Centre Georges Pompidou being a chief example). See my self-guided Marais walking tour (at TripSavvy) for full details.

Next, head over to the Opera Garnier and Grands Boulevards area (Metro: Opera or Bourse), where you can witness the full grandeur of the Baron Haussmann’s dramatic transformation of Paris in the 19th century, and visit gorgeous passages (covered passageways) boasting their own lavish design elements. This guide to the Opera/Grands Boulevards area is especially useful.

Finally, consider heading over to the leafy, posh 16th arrondissement to ogle at a few art-deco mansions and elaborate buildings– including this one,  known as the Castel Beranger, located at 14 rue Jean de la fontaine (Metro: Ranelagh or Jasmin). Designed for an architecture competition by the well-known Belle Epoque architect Hector Guimard, the apartment building was built in around 1895.

3. Meet Parisian artists, admire their work and see their studios

Between May 24th-27th, 2019, more than 200 artists based in the creative hotbed of Belleville will be opening their studios to the general public, showing their work and offering a unique glimpse inside countless Parisian buildings and workspaces.

Known as the “Portes Ouvertes d’Ateliers d’Artistes de Belleville” (Open Doors at Belleville Artists’ Studios), the annual event is now the largest of its kind in France. Since launching in 1990, it’s become an increasingly coveted May tradition, giving anyone interested in contemporary art a chance to see where the center of creative drive lies in present-day Paris. It’s also a great way to practice your French (if you wish to) an gawk at some surprisingly beautiful inner courtyards and other architectural elements, see some of city’s most interesting street art on streets such as Rue Denoyez, and even enjoy a drink or dinner among the arty local crowd. Studios and dedicated exhibition spaces/galleries are open daily between 2pm and 8pm in 2018.

Editor’s Note: Due to the ongoing global health crisis, most or all of the usual annual events in the city are likely to be cancelled or postponed in 2021. Check back here soon for updates.

As I mention above, the spring exhibition season is at full tilt at this time of year. Here are just a couple of shows I genuinely recommend.

This much-anticipated show at the Centre Georges Pompidou introduces anyone unfamiliar with the work of Victor Vasarely, an artist from the mid 20th century whose striking forms, colors and symmetries prompted critics to call him one of the founders of so-called  “optic art”. Vasarely worked starting in the 1960s and was heavily Influenced by the Bauhaus movement. At this first retrospective on the artist,, around 300 paintings and other works highlight his singular vision and style. Showing through May 6th 2019.

Another show that’s on throughout the spring and summer and already proving a smash hit is King Tut: Treasures of the Pharaoh.

The exhibit opened in Paris on March 23rd and will run through September 15th, 2019. Lines are long and tickets are hard to come by– so reserve as soon possible.

As mentioned above, the Open Artists’ Studios in Belleville are certainly on the cards if you want to get a sense of the city’s vibrant contemporary arts scene. And the Centquatre cultural center in northeastern Paris continues its 9th annual editon of Circulation(s):  a photography festival showcasing the work of  lenses from around the globe. The latter remains open through June 30th, 2019.

For a fuller program of exhibits, shows, and special events around town in May, see this page.

Ready to hit the book button? You may want to slow down just a tad. If you’re flying, look for deals on flights well ahead (via Skyscanner). Prefer to take the train? You can book tickets and find discounts on passes at Rail Europe.

*Disclaimer: This post contains a few affiliate links. If you book products or services though these links it comes at no additional cost to you, but will help to fund more free, in-depth articles and travel tips here at Paris Unlocked. Thank you.

Is the Paris Pass Worth the Money? 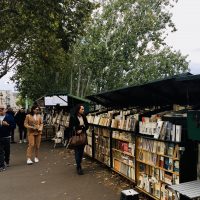 A Look at the Bouquinistes of Paris: Traditional Booksellers on the Seine 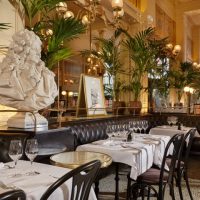 Le Grand Colbert Restaurant, an Elegant Throwback to Paris Circa 1900

In Focus: The Musée Marmottan Monet in Paris