Much ink has been spilled about French people having no “real”sense of humor– at least not beyond a strong penchant for biting political satire, à la Voltaire. As a 2003 article in the Economist opined:

Does humour exist in France? Before the French revolution of 1789, the word humour was hardly known. People knew esprit (wit), farce (prank), bouffonnerie (drollery) and humeur (a state of mind, or mood), but not humour. Only in 1878 did the French Academy, the institution that stands guard over the French language, accept humoristique as a French word. A year later Edmond de Goncourt used humour without italics as a French word in his novel “Les Frères Zemganno”, but not until 1932 did the academicians give their approval to the noun humour….To this day l’humour engagé—political satire and caricature—features prominently in France. Comic films and plays are either farcical or witty, with plenty of wordplays and rapid-fire verbal exchanges. But humour, in the English sense, remains an alien concept.

Frankly, though, after logging a decade of living among the supposedly grim and self-serious Gallic people, it’s my view that the British author of this observation simply wasn’t versed enough in the subtleties of everyday interactions in France to pick out something he’d associate with a sense of humor. But that doesn’t mean that French culture utterly lacks one.

How do I know? Well, let’s just say it took me the better part of a decade to crack this particular chestnut.

When I first arrived in the French capital, fresh out of college and brimming with starry-eyed wonder and open-heartedness (but also an underdeveloped sense of self-humor), I was routinely crushed by what I interpreted as mean, undiplomatic comments.

These seemingly were shot my way from French servers, shopkeepers, bakers, bankers, doctors and even colleagues. Exchanges like these would leave me pouting, offended, and, most often, flustered and tongue-tied:

Me: C’est pas très gentil de dire çà (That’s not nice to say that). I leave the store in a huff, with no new shoes.

Server at a cafe, gently mocking my order of  “un cafe avec crème, s’il vous plait” by affecting an obnoxious faux-American accent in French: “Voulez-vous autre chose avec votre “café avec crème?” (Would you like anything else with your “cafe avec creme”?)

Me (blushing as I realize I was supposed to say “café crème” rather than “café avec crème”– and mortified that my accent’s so obviously American: “Non. C’est tout” (No– that’s it.) I pout; and quickly pay the bill without leaving a tip)

Baker, commenting on the large bag of pastries I just ordered for a breakfast with friends: Avec tout cà, il va falloir passer toute la journée au jogging! (With all that you’ve got there, you’ll have to spend the whole day jogging!)

Me: (Complete silence. I’m convinced she’s trying to imply I’m overweight, all the while smiling. I pay and walk out.)

A French colleague, commenting with a smile on my serious expression as I type away on my computer and disregard his attempts to distract me with company gossip and jokes: “Dis donc Courtney, tellement sérieuse, on dirait Stalin! Personne ne peut te déconcentrer! (Geez, Courtney, you’re so serious you could be confused for Stalin. No one can break your concentration!)

Me: I look up and smile tensely, not at all amused. The exchange ends there, with my colleague looking confused and slightly embarrassed at my reaction.

Now, one might argue that these exchanges were genuinely rude. In each awkward instance, the person I was interacting with said something that could easily be interpreted as an unkind little jab, if not an outright insult. When applying Anglo-Saxon norms of polite behavior, none of these exchanges can be qualified as “nice” ones.

But Parisians don’t generally think this way (at least as far as I can tell). While they can be genuinely kind and considerate (no, really– they can–) they don’t do “nice”– or at least not the version you see in Californians with grins so wide and frozen they at times seem almost grotesque, or in English people who apologize profusely when you run straight into them on a crowded street.

I can’t speak for codes of humor outside of the capital, but in Paris, the best way to show you have a sense of (self) humor — and to connect with other people when you don’t know each other well– is to embrace these little jabs as gentle teasing, or even in some instances (the case of my loudmouthed colleague) as signs of affection and growing familiarity.

Even more importantly– it’s intended as a game of verbal ping-pong, with the objective of engaging in mutually teasing banter. Half the fun is the expectation that you’ll not only take the teasing with grace and humor– but that you’ll shoot back by teasing the other person in turn.

It took me, as mentioned earlier, years and years for me to learn to respond differently in these sorts of interactions.

Mastering the language was a big help– as was observing the deadpan, self-deprecating humor of many of my French friends and colleagues. So after a while, the exchanges mentioned above started to look something like this, instead:

Server at a cafe, gently mocking my order of  “un cafe avec crème, s’il vous plait” by affecting an obnoxious faux-American accent in French: “Voulez-vous autre chose avec votre “café avec crème?” (Would you like anything else with your “café avec crème”?)

Me (affecting an obnoxious faux-French accent and responding in English): Tank yoo….Pleaaz, eh, joost can yoo geave me zee, um, how you say, beel, please?)

Baker, commenting on the large bag of pastries I just ordered for a breakfast with friends: Avec tout cà, il va falloir passer toute la journée au jogging! (With all that you’ve got there, you’ll have to spend the whole day jogging!)

Me: C’est sur! Mais ca doit être encore plus dur, d’être tenté par tout çà toute la journée! (That’s for sure! But it’s got to be even harder (for you) to be tempted by all this [stuff], all day long!)

A French colleague, commenting with a smile on my serious expression as I frantically type on my computer and disregard his attempts to distract me with company gossip and jokes: Dis donc Courtney, tellement sérieuse, on dirait Stalin! Personne ne peut te déconcentrer! (Geez, Courtney, you’re so serious you could be confused for Stalin. No one can break your concentration!)

And so on. As you can see, after a few years of studying the local norms, I learned to poke back– and enjoy the harmless, teasy banter. My friendships and interactions became lighter and more natural.

In short? I’d cracked at least one of the codes of Parisian, if not French, humor: what we’ll call the ping-pong game.

Of course, when you’re a tourist in Paris and just learning the rules of the culture, trying to do this yourself is a tall order indeed. But it can be helpful to realize that some of the exchanges you might otherwise interpret as rude or undiplomatic might actually amount to gentle, well-intentioned teasing.

There are, naturally, instances of genuinely rude or unfriendly service– I’m not talking about these. If the person’s smiling or looking otherwise jovial as they deliver a line you don’t particularly find funny or nice, they probably simply don’t realize that they’ve said saying something potentially offensive.

The best you can do, if you’re tongue-tied or don’t know how to respond? Smile back with a little glint in your eye, or perhaps a gentle, knowing eye-roll, and brush it off.

Booking Your Next Trip to Paris?

Getting to know the culture can be tough, but guided tours with a cultural bent can be an ideal way to ease in and learn in non-judgemental surroundings.

The excellent food tours from Eating Europe are ones I wholly recommend, blending delicious tastings with observations on French culture, architecture and history.

You can also browse a variety of guided tours from operators such as The Tour Guy, and this group offers free walking tours with a cultural angle. 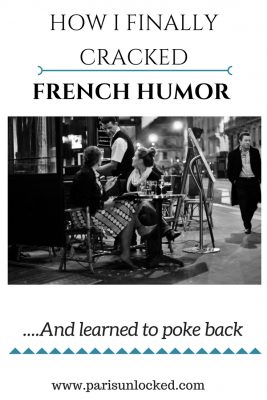 9 thoughts on “How I Finally Cracked Parisian (and French) Humor”