John Donohue’s A Table in Paris is as much a feast for the eyes as it is for the culinary imagination. A lushly illustrated, hardcover guide to a careful selection of the capital’s restaurants– from Belle-Epoque brasseries to contemporary bistros helmed by a new generation of talented, daring chefs– the book features dozens of drawings of over 100 beloved Parisian tables, all sketched onsite by the author and artist, then later partially filled in with color.

Keep reading for more on why the book makes an excellent companion for gastronomic adventures in the capital, followed by a short interview with the author on his artistic process, finding inspiration in the restaurants he profiles, and more.

(A disclosure: I assisted the author with arranging illustration sessions at some of the restaurants profiled in the book, researched and wrote descriptions for a companion website, and received a complimentary copy of the book for review purposes).

An Accessible Yet Elegant Guide

Donohue, a former New Yorker editor, illustrator, and author of All the Restaurants in New York, has created an inviting, un-intimidating yet elegant visual guide to the capital’s most noteworthy and/or historic restaurants.

The handsome volume is easy to peruse and navigate. It features an introduction with useful tips on Parisian restaurant styles and French table etiquette, a full listing of restaurants organized by neighborhood, an index at the back, and ample space on most pages to jot down your own culinary notes and experiences. It’s sturdy but portable enough to bring along in your suitcase for inspiration, and the design elements in red, blue and white (echoing the French tricolore flag) are engaging without venturing into kitsch territory.

The great strength of the book (in my sense) is that it’s a real pleasure to browse, and is generous without feeling overcrowded with information. In most cases, the illustrations take up three quarters or more of the page, and are accompanied by pithy descriptions of what makes each place worth a lunch or dinner reservation. Is it the eccentric chefs or grouchy but amiable owners? The lavish Art Nouveau dining room? The famous patrons who once (or currently) haunt the terrace? The bizarre clown-themed decor?

While Donohue might have limited his guide to a compendium of historic restaurants with eye-catching decor (which are, by the way, rarely the places offering the most noteworthy fare these days) he surveys (and illustrates) a new crop of gastronomic destinations, from the 11th arrondissement’s much-lauded Septime and Clamato to the Michelin-starred, Asian-themed Yam’Tcha in the Louvre-Tuileries area.

Another thing that’s compelling about the book is that it’s in some respects a collaborative effort. Donohue consulted with top journalists, chefs, food writers, and even the American filmmaker Richard Linklater (of the “Before” trilogy fame)– inviting them to contribute recommendations and stories for the book.

Some of these expert contributions take the form of short blurbs, while others are longer, amusing stories and personal recollections about the restaurants. The effect is a collection of spirited voices and perspectives on what makes the city’s tables worthy of passion or literary curiosity.

The Art of Illustrating: A Short Chat With the Author

I wanted to catch up with Donohue to learn more about how his most recent book came together, the illustration process, and how the Paris project differed from his previous one on New York restaurants. Below is a lightly edited version of our short exchange by e-mail.

What is your artistic process like, briefly? For example, do you sketch the restaurants from several angles? Do you do a lot of research on each place before setting up to sketch live, or do you prefer to gather your own impressions first and learn the details later? Do you complete any studies from photographs ahead of time?

Great question. I work in ink, from life [and] with no preparation. I never study the place beforehand. I simply show up and draw what is in front of me. My own naïveté (or ignorance?) sometimes gets the best of me. The day I drew Septime, I didn’t understand it was closed and that when a place in Paris is closed the proprietors draw the shutters. So I drew it shuttered. Only later did I realize this and go back and draw it when its windows were visible!

My drawings are a bit like Google street view. I capture what’s there at a given moment. Drawing for me is all about accessing and entering the present moment so it works well. Since the start of the pandemic–now that there are outside dining structures in front of many places–I tend to look at old Google street views to see what was there before. I often capture places at angles determined by the flow of pedestrian traffic (I need to stand next to a piece of street furniture so I’m not too exposed on the sidewalk–when I draw I really lose myself in the process and am a bit vulnerable).

How do you decide to profile a restaurant, especially the newer ones?

When I first started, about five years ago, I drew restaurants in NYC that were well-known and beloved. Because I have lived in the city for so long, it was easy for me to intuit which places were important. As my collection has grown, my process has changed. Every successful restaurant has its fans, and the most passionate ones tend to reach out to me now to ask for requests. So I have a long list of NYC places that I have yet to get to that I know will find an audience.

For London and Paris, which I visited in 2018 and 2019, respectively, I had a different process. I reached out to people who know and love each city and/or lived there who could tell me their favorites. I reviewed articles on the best restaurants in each city and made a list. I asked New York City chefs and food writers about their favorites, and then I triangulated to see which places were most frequently recommended.

Can you recall a restaurant in Paris that holds a special significance for you, and comment on whether illustrating it proved more or less difficult owing to this personal connection and/or attraction? On the flipside, were there any places that didn’t seem particularly striking at first but were recommended to you, and that “became” interesting through the process of illustrating them?

Verjus is where my family had its first Paris meal together and my teenage daughters got to experience their first tasting menu (meaning, they had to eat what they were told!) My family has significant food allergies (nuts, gluten) and the staff at Verjus was beyond accommodating. I couldn’t believe how they adjusted their tasting menu to take care of us. It was a very special evening.

When I went back to draw it, it was a challenging facade. The restaurant is tucked in an alleyway-type narrow street typical of Paris, and I could not get far [enough away] from it to see it in perspective. I had to draw it close up to the front door. Luckily, the door was nicely arched and fun to draw.

Despite my experience at Verjus, many of the most noted and famous places have the most discreet and plain facades and are the most challenging to draw. It seems like there is often an inverse relationship between how highly regarded a place is and how interesting its facade may be. The list of these high-end restaurants is too long to mention, but I always find something interesting to draw in their facades. Once we start to see what’s in front of us we can also start to see what we have been missing.

Can you share (without ‘outing’ anyone with particulars) an awkward or amusing moment or two that you’ve encountered (with owners, waitstaff, passers-by) during the process?

In Paris I was pretty much left alone, but when I was in London the year before I was drawing the Wolseley on the Strand and I was standing in the middle of the giant island between the cars. I noticed that a police officer walked by and gave me the once-over. I wondered if I looked suspicious being there. Also, when I was in Soho once, I had to side step a genuine fistfight between grown men that was a bit of a daylight horror. [And] after I turned the corner, a drunk guy took a swing at me but was too uncoordinated to even come close, so it was more amusing than scary.

A Table in Paris: The Cafés, Bistros, and Brasseries of the World’s Most Romantic City is published by Abrams Books and is currently priced at $27.50 (hardcover). It can be purchased here.

French Christmas Traditions to Enjoy This Year, Abroad or at Home 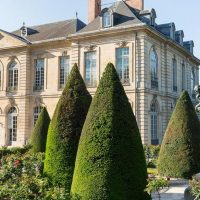 The Rodin Museum in Paris: A Tribute to France’s Most-Famous Sculptor 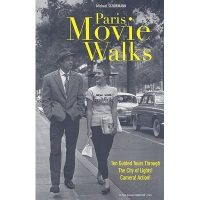